ORGANISERS OF THE ROYAL NATIONAL MOD

Here are the winners of the September Inverness 400 Club - Congratulations!

Please note the new email address for the Clarsach Society:

Studio G43, Out of the Blue Drill Hall 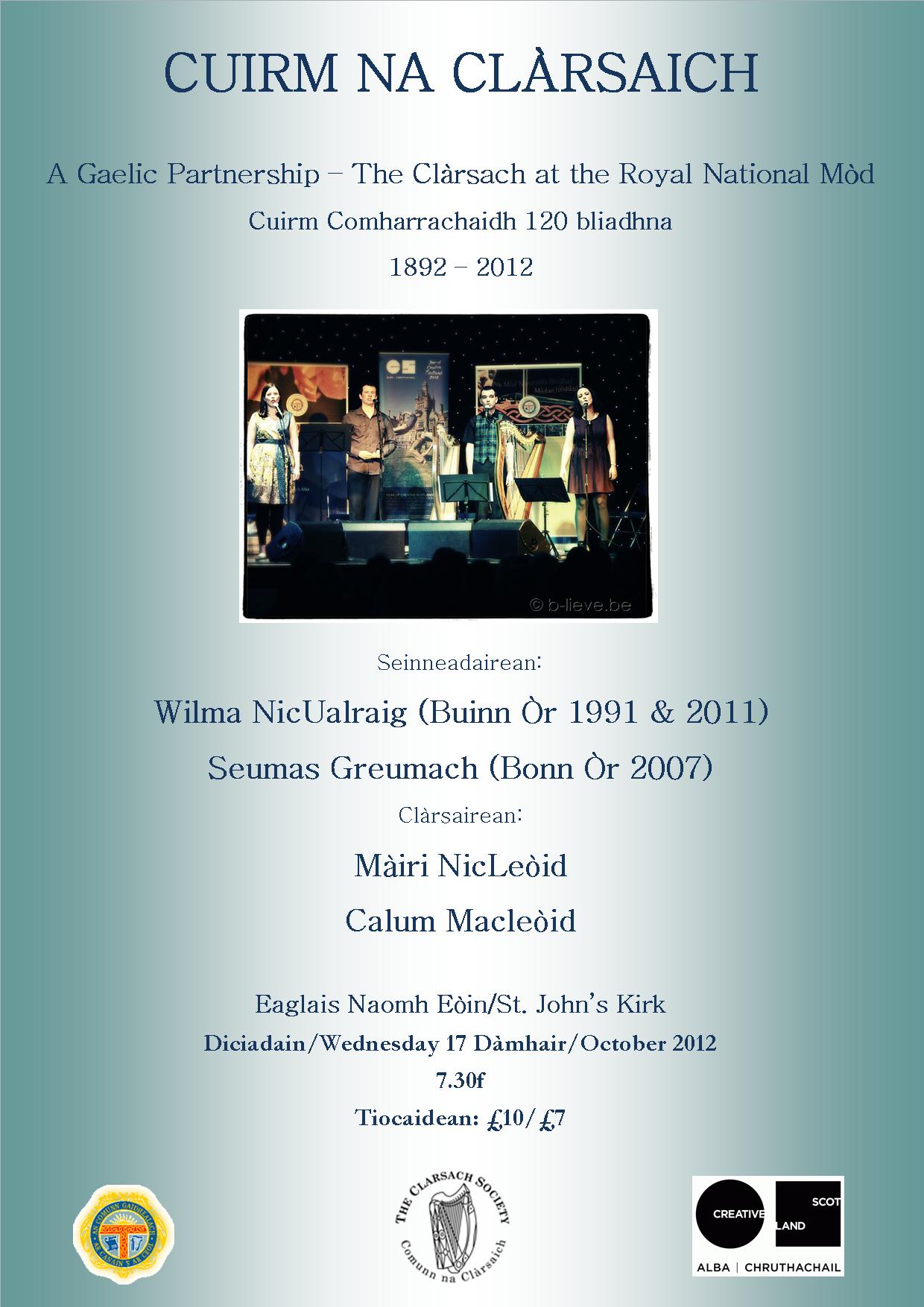 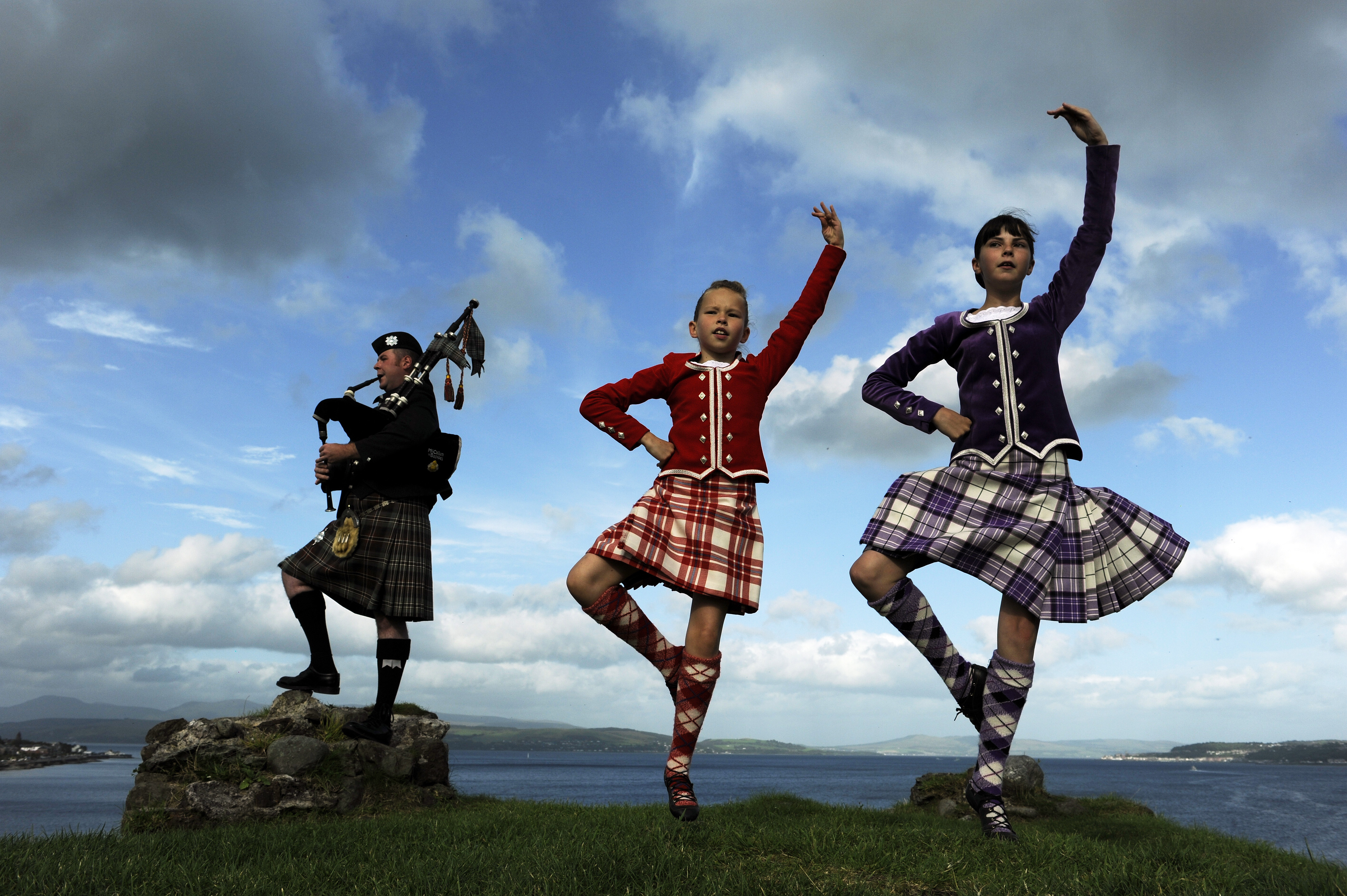 Am Mòd Nàiseanta Rìoghail (The Royal National Mòd), Scotland’s premier festival celebrating Gaelic linguistic and cultural heritage, will this year travel to Dunoon for the seventh time in its 120 year history, last visiting the town in 2006.

The eight day celebration of Gaelic music, dance, drama, arts and literature, which takes place from Friday 12th until Saturday 20th October, is set to attract thousands of participants and visitors.

Organised by An Comunn Gàidhealach, the world’s oldest and most respected Gaelic organisation, The Royal National Mòd is a competition based event which attracts Highland dancers, pipers, musicians, singers and many more competitors from communities throughout the world.

Now in its 120th year, the Royal National Mòd has a long and impressive history and has evolved to become the most important festival of the Gaelic language in Scotland, regularly playing host to Gaelic speakers and competitors from as far afield as Australia, USA and Canada.

John Morrison, chief executive of An Comunn Gàidhealach, said: “This is the seventh time Dunoon has hosted the Royal National Mòd and we’re delighted to come back to Dunoon as we always receive such a fantastic welcome from the locals here.

“Having recently played host to the Cowal Highland Games, the people in Dunoon are well versed in accommodating a plethora of dancers, musicians and pipers so we’ll be sure to take full advantage of the hospitality throughout our week-long visit.”

First held in 1892, the Royal National Mòd has evolved to be the second most important festival in Scotland, with ever increasing popularity and visitors coming from as far as Australia, USA and Canada. Since 1912 the Mòd has been associated with the royal family, the Queen herself is a patron of the Mòd’s parent body An Comunn Gàidhealach, and members of the Royal Family regularly attend the event including HRH Duke of Rothesay who visited the Mòd in 2010 when Caithness played host for the first time.


While the Mòd is mainly a competition based event, it also has a huge social influence and responsibility. By promoting and celebrating the Gaelic culture publicly on an international stage, it helps to bring people and communities – Gaelic and non-Gaelic – together. It provides an incentive for talented individuals and groups to develop and refine their talents in the public arena.

The Royal National Mòd offers a huge range of opportunities for people to compete, from fluent Gaelic speakers to those in the fledgling stages of learning the language.

The festival kicks off on Friday 12th October with a grand opening ceremony taking place in the Queen’s Hall early evening.

Saturday traditionally plays host to the annual shinty match which this year sees Kyles Athletic play Bute as well as the fiercely fought out football competition this year Dunoon will play against the 2013 Mòd host venue: Paisley. The fiddlers rally is also hosted over the weekend in the Queen’s Hall with hundreds of musicians demonstrating their skills in a musical maelstrom.

Children’s competitions take place at the start of the week and with nearly 1,650 children from across the country taking part, entries look similar to the last time the Mòd visited Dunoon. The adult Traditional and Gold Medal qualifying rounds and Clarsach competions will take place on Wednesday 17 October with the finals on Thursday 18 October. Entries from male competitors are very healthy with more men entering both the Traditional and Gold medal competitions this year.

The coveted Lovat & Tullibardine and Margrat Duncan titles will be awarded on Friday 19 October before the final concert takes place. The grand finale of the 2012 Royal National Mòd will take place on Saturday 20 October when the Massed Choirs will gather and parade through Dunoon town centre led by local Pipe bands.

The fringe activities also offer an annual opportunity for Gaels and non-Gaels to gather and renew old friendships as well as forging new ones. Activity for this year includes ceilidhs in the Glenmorag Hotel, Park Hotel, the Braes, Ingrams bar, Sinbads and 51st State as well as a concert to commemorate the 120 year link between the Clarsach Society and the Royal National Mòd, which will be held on Wednesday 17th October and features music from Mòd Gold Medallists Wilma Kennedy and James Graham, with musicians Màiri and Calum Macleod.

Argyll and Bute council leader, Cllr. Roddy McCuish, said: “Whenever the Mòd is hosted in Argyll and Bute we feel it is coming home, as our history is closely entwined with the Mòd.

“The first ever festival was held in Oban in 1892 and now it is an internationally recognised event and attracts enthusiasts from all over the world.

“Another major benefit of the Mòd is that it provides a major economic and cultural boost to the host area and attracts considerable national and international publicity, helping to raise the profile of the town in which the event is being held.

“The local Mòd committee, Argyll and Bute Council and the local community will be very pleased to welcome visitors to the Mòd in Dunoon 2012.”

Paul Bush OBE, Chief Operating Officer for EventScotland said: “In 2012, the Year of Creative Scotland, we are delighted to once again be supporting the Royal National Mòd, which will celebrate the Gaelic language and Scotland’s rich cultural heritage. Scotland is the perfect stage for events, and Dunoon will undoubtedly provide the ideal backdrop to what is one of the country’s most iconic events.”

For full festival programme and details, visit www.acgmod.org or www.dunoonmod2012.org.uk

* may be subject to change

The Mod 2012 local organising committee are hosting a fund raising ceilidh on Friday 28th September at Strachur with Trail West!

Further information is available at: www.dunoonmod2012.org

Anyone wishing to take a Gaelic test can do so during Mod week in the Queen’s Hall. In order to book an appointment for a test, you must contact An Comunn beforehand: info@ancomunn.co.uk or tel: 01463 709 705.

You can also arrange an appointment during Mod week itself by visiting the Mod information desk in the Queen’s Hall and speaking to An Comunn staff.

The Music Committee have issued changes to the following Mòd 2012 competition pieces.

The changes are explained below and should be adhered to for these pieces. If you have any queries regarding these changes, please don’t hesitate to contact James Graham at james@ancomunn.co.uk or telephone 01463 709 705.

Details on changes to any other competitions can be viewed by clicking here.

There should be a repeat mark at the end of the last bar in verse 4.

Competitors delayed with regard to their appearance at another venue must inform the Chief Steward or one of his / her staff in order that all information can be relayed to the competition chairperson at the appropriate venue.

Competitors are not allowed to consult books, manuscripts or copies of music during competitions with the only exception being instrumental competitions.

Important Note: Competitor’s should allow a minimum of 2 hours after end of competition before collection of Adjudication Sheets.

Mod 2012 Information Desk will be situated in the Queen’s Hall and will be open on Saturday 13th and between Monday 15th and Friday 19th October.

Mod 2013 Music will be on sale at the Mod Information Desk in the Queen’s Hall. 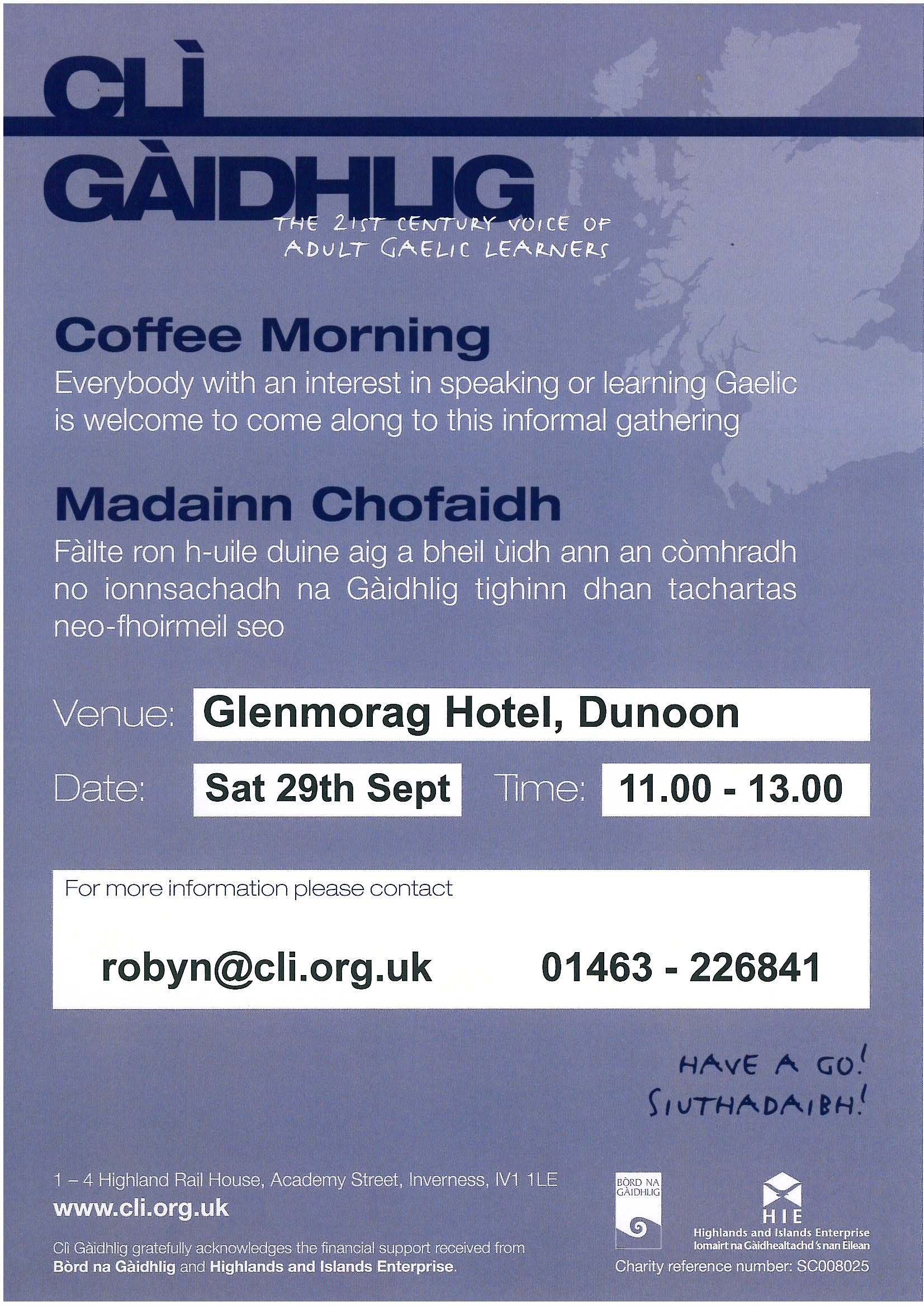 Hosts of the 2016 National Mòd

Manage your membership and account details in our online system.